Per the Association for Library Services to Children (ALSC), El día de los niños/El día de los libros (Children’s Day/Book Day), known as Día, is a celebration EVERY DAY of children, families, and reading that culminates every year on April 30. The celebration emphasizes the importance of advocating literacy for children of all linguistic and cultural backgrounds. 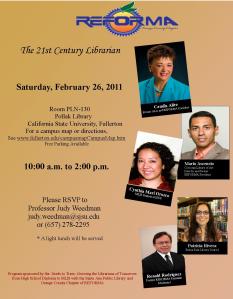 Summary: In The Heights Musical-OCPAC

This truly has been a tremendous summer for OC REFORMA in many ways, including the celebration of OC REFORMA’s 30th anniversary as well as honoring our new scholarship winners for 2010 in July.

To bring this historic summer to an appropriate conclusion, a large contingent of local REFORMA members and familia attended the second to last performance of In the Heights at the Orange County Performance Arts Center on 8/15/2010, a musical with its proud Latin roots on display, providing a pleasurable musical escapade, with its blazing hip-hop lyrical style mixed in with a sizzling sonic onslaught of danceable salsa beats and cool Latin jazz tunes, all in our own backyard in the beautiful city of Costa Mesa on a warm Sunday afternoon.

The musical has received much recognition for its unique blend of hip-hop and Latin music interjected with a solid choreography, and it was immediately obvious why critics raved as the opening piece really made its mark with its laid-back vibe and smooth lyrical flow that got the Orange County crowd bobbing their heads in unison, including many REFORMA members.

In case you were unable to attend the performance, here is a quick taste of the music and dance via YouTube from previous performances. Check it out: In The Heights-Macy’s Thanksgiving Parade, Blackout in the Heights, and The Club–In The Heights.

***
This social event in August would not have been remotely possible if it was not for Al Milo, OC REFORMA treasurer, who not only proposed the idea for a OC REFORMA social gathering for August during the last official meeting, but also took the initiative to coordinate the actual event itself, providing REFORMA members with an excellent seating arrangement to enjoy the performance together. OC REFORMA therefore would like to acknowledge and thank Al Milo for bringing this special event into fruition. Great Job!

The first batch of photos of Saturday’s (July 24th) celebration have been posted to the OC REFORMA picture album. Please access our album to see some of the wonderful photos taken by OC REFORMA members during the event festivities: 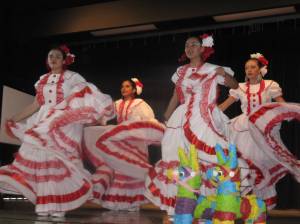 OC REFORMA would like to thank all of the members and scholarship recipients who attended this special and historic event.  Moreover, OC REFORMA would like to especially thank and acknowledge the planning committee members that coordinated the Tardeada. Their hard work and dedication in organizing this spectacular event, an event filled with great Mexican food, excellent entertainment (Baile Folklorico Renacimiento!), and a memorable slide show of REFORMA’s thirty year commitment to library advocacy, left a lasting impression on all who attended Saturday’s celebration. In fact, here are some comments made the day after the event:

All in all, the anniversary celebration was truly a night to remember, so make sure to visit our picture album via the link below.

Hope to see all of you there!

Reflections from the Past, OC REFORMA 1988

OC REFORMA has been active in Orange County since 1979, promoting and advocating Library Services for the growing Latino and Spanish speaking communities across the county for over thirty years.  Although numerous workshops and activities have taken place over the past three decades, many of the photos of these past events have yet to be scanned and made available online. Fortunately, Anthony Arroyo (Pima Community College Library) has put together a wonderful online photo album of one specific workshop that took place in 1988, offering the newest members a brief glimpse of some of the rich history of OC REFORMA’s community involvement with advocacy, education, and outreach. Please access the following link below to take a trip back in history to view some classic photos from OC REFORMA’s illustrious past.

The scholarship application deadline is: Tuesday, May 4, 2010 (postmarked). For more information, including the application, access the following link: 2010-11 OC REFORMA Scholarship Application

The META, REFORMA/SJSU Mentor Program, is designed to recruit, encourage and support bilingual and/or bicultural individuals in the SJSU School of Library and Information Science.