Instructions on filling out the application available here.

The OC REFORMA chapter would like to thank all of the REFORMA members who volunteered to staff the booth for this year’s California Library Association’s (CLA) annual conference held at the Pasadena Convention Center.  The booth, located in the general convention center floor, provided local REFORMA chapter members a wonderful opportunity to provide information to librarians from all areas of California–from Northern California, Central California, and Southern California–about library services for Latinos and the Spanish speaking.

A wide variety of handouts and pamphlets covering library services for Latinos and the Spanish speaking were available at the OC REFORMA booth as well as scholarship information for library school students.

In fact, we were very delighted to see so many librarians approach the the OC REFORMA sponsored booth and express a deep interest in learning how they can better provide appropriate and relevant services to the growing Latino and Spanish populations in their own communities. 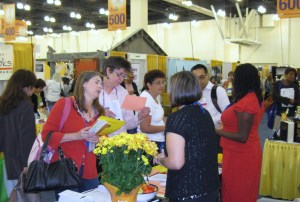 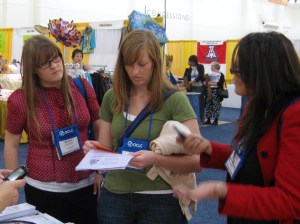 Patricia (OC REFORMA) sharing information about some of the handouts available at the OC REFORMA sponsored booth. 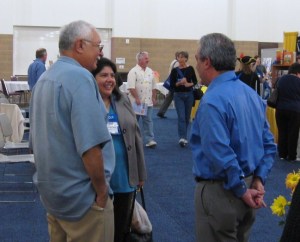 John Ayala (OC REFORMA) chatting with friends who stopped by the booth to say hello. 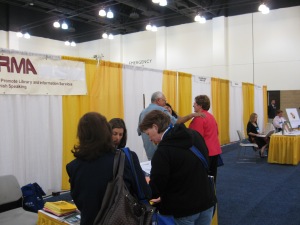 Questions kept on coming all morning and afternoon.

The pictures above show the popularity of the OC REFORMA booth with CLA members, filling an important space at this year’s conference by giving OC REFORMA members, along with members from the LA and Northern CA chapters respectively, the unique opportunity to provide valuable  information to conference attendees about library services for the large and growing Latino and Spanish speaking population in California. For more pictures, please click on the photo below: OC REFORMA will be at Booth #625 for this year’s CLA conference.  For more information regarding registration/passes/volunteers, please check the OC REFORMA listserv.

Friends of the Fullerton College Library

The Friends of the Fullerton College Library in cooperation with Barnes & Noble will be holding a book-fair on Saturday, November 14th and Sunday, November 15th.  For more information, please click on the link below to access the flier.

Friends of the Fullerton College Library

Your support for the event is appreciated.

The next OC REFORMA meeting is scheduled for Saturday, October 17, 2009, at Cal State Fullerton Pollak Library. The META meeting will begin at 9:00 am, with the regular membership meeting scheduled to begin after 10:00 am. The meeting will be in the Reference Workroom, which is located on the first floor of the north side of the library.

Parking is free on Saturdays. For directions to the campus access the following link: http://www.fullerton.edu/campusmap/

Are you interested in attending a really cool book sale in the beautiful city of Santa Ana?  Well, if the answer is a resounding yes, here is your chance.  Mark your calendars because on Friday, October 16 from 10 a.m.-5:00 p.m. and Saturday, October 17 from 10 a.m.-3:00 p.m. the Friends of the Santa Ana Public Library is holding a large, general book sale at the Main Santa Ana branch. This is an excellent opportunity to purchase a variety of books at bargain prices!  I don’t think there is a better way to start your weekend off than by helping out our friends at the Main Santa Ana Public Library Branch by attending this book sale.  And, who knows, maybe you will run into some local OC REFORMA librarians at the sale. Can’t wait!!!

For additional information such as directions and parking, please access the following flyer(s):

The next Orange County Chapter of REFORMA meeting is scheduled for 9:30 am on Friday, Aug. 28th at the Main Library & History Center in Orange. We will meet in the Staff meeting room. Our hosts will be Irma Morales and Yolanda Moreno. META meeting is at 8:30 am before the general meeting.

The Orange County REFORMA Chapter potluck dinner honoring Susan’s 2009 Librarian of the Year (LOTY) award was, above all, a night to celebrate her remarkable achievement locally with fellow OC REFORMISTAS and friends.  Because some of us were not able to attend the official ceremonies at the National REFORMA Conference in Chicago this past July (Click here for photos), the potluck celebration this past Saturday was the next best thing with regards to honoring Susan’s tremendous accomplishment in our own special way. It goes without saying, therefore, that the OC REFORMA Chapter is unquestionably proud of Susan Luevano bringing the 2009 LOTY award, metaphorically speaking, back to the OC, serving as an inspiration for all, particularly our newest Chapter members just beginning to flourish in their own professional careers.

OC REFORMA would like to thank John and Gloria for hosting our wonderful potluck dinner.  Their hospitality throughout the evening was sincerely appreciated.  In addition, OC REFORMA would like to thank all of the members who attended, considering it is summertime, it was invigorating to see such a large contingent of local Chapter members available for the potluck, a potluck, we might add, consisting of tasty homemade dishes such as succulent pork carnitas, a delectable chicken casserole, and a scrumptious meaty lasagna as well as numerous rich and creamy desserts, a variety of healthy vegetarian side dishes, and a plethora of ice-cold beverages to imbibe during the warm, summer evening. As a side note, OC REFORMA Librarians, not too surprisingly, organize some of the best potlucks hands down in the OC, always filling, always satisfying!

In short, if you were unable to attend Saturday’s event then be sure to access our OC REFORMA photo album to view some of the magnificent pictures taken during the potluck. 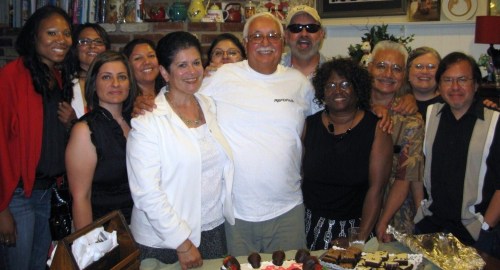 Just a friendly reminder– if you plan to attend this Saturday’s potluck (8/8),  please RSVP to John Ayala ASAP! More information available via REFORMANET.

REFORMA OC
Create a free website or blog at WordPress.com.